The MSI Z87 G45 Gaming ATX LGA1150 Motherboard is considered a high-end motherboard for most people and some even consider it the best lga 1150 motherboard , although that’s arguable, it suits competitive gamers just perfectly due to its high quality sound card which proves to be a very valuable asset in competitive games, we have tested this motherboard and decided to share with you these results to supply to our readers an objective review of this motherboard’s overall quality.

Competitive gaming has increased over the past few years, reaching the hundreds of millions of fans from all over the world and as such the hardware market has been forced to increase and improve with it as well, many motherboards and components have been built to target the competitive gamers by allowing them a lot of freedom about what kind of build they want to run or may run in the future, hence so many entries and SLI support, not only that but the gaming motherboards also have very high quality sound cards which you will not find on cheaper MOBOs. 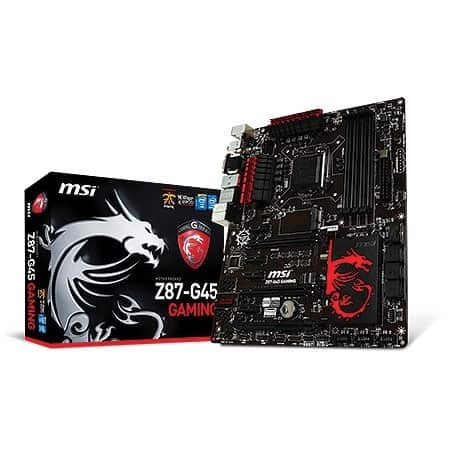 These are just some of the hundreds of amazing specifications that this motherboard has. However, we have featured these four because they’re what makes or breaks a great motherboard.

The MSI Z87-G45 Gaming ATX LGA1150 Motherboard features the 1150 socket, while not being the latest socket released, it is still the most money efficient socket available until 1151 becomes a bit cheaper, which won’t happen for a while, featuring this socket means that you’ll be able to use a wide variety of processors with this motherboard so your choices will not be limited.

It also allows the user to insert up to 4 RAM Sticks, with a total limit of 32Gb DDR3 Exclusive RAM, although it doesn’t support the newest architecture DDR4, it was already expected to begin with since it’s not a 1151 socket motherboard, the limit of 4 sticks and 32Gb is far more than you’ll most likely ever need for gaming and even for other tasks, there’s hardly anyone who even goes above 16Gb let alone 32Gb.

Some people may not know this, but you can overclock your RAM speed, yes it’s a thing, this motherboard allows RAM Overclocking speed up to ~3000Mhz which is always a plus because faster RAM does increase FPS in some situations.

Regarding one of the most important factors, if not the most important, the soundcard is very high quality as expected from this motherboard, it had to be or else there would be no point advertising it as a gaming motherboard although the “gaming” part is more of a marketing sales pitch than anything else.

After everything we’ve wrote we do agree that it’s worth being named a “gaming” motherboard, while it’s not the most accessible price it does fit all your needs and provides every gamer with everything they will ever need from a motherboard, it’s a great buy if you’re looking for high-end motherboards, it’s no wonder that many people think it’s the best lga 1150 motherboard available on market right now.